85% Women (Bachelor's)
13% Racial-Ethnic Minorities* (Bachelor's)
$53,744 Median Salary (Bachelor's)
399 Bachelor's Degrees
26 Master's Degrees
12 Doctor's Degrees
What traits are you looking for in a nursing school? To help you decide if Weber State University is right for you, we've gathered the following information about the school's nursing program.

WSU is located in Ogden, Utah and approximately 29,596 students attend the school each year. Of the 399 students who graduated with a bachelor’s degree from Weber State University in 2021, 399 of them were nursing majors.

Online Classes Are Available at WSU

Online courses are a good option for students who need a more flexible schedule that allows them to pursue an education when and where they want. Whether you're going to school part-time or full-time, you may find distance education the right choice for you.

For those who are interested in distance learning, WSU does offer online courses in nursing for the following degree levels:

The following rankings from College Factual show how the nursing progam at WSU compares to programs at other colleges and universities.

The nursing major at WSU is not ranked on College Factual’s Best Colleges and Universities for Nursing. This could be for a number of reasons, such as not having enough data on the major or school to make an accurate assessment of its quality.

In 2021, 26 students received their master’s degree in nursing from WSU. This makes it the #324 most popular school for nursing master’s degree candidates in the country.

There were 12 students who received their doctoral degrees in nursing, making the school the #209 most popular school in the United States for this category of students.

How Much Do Nursing Graduates from WSU Make?

The median salary of nursing students who receive their bachelor's degree at WSU is $53,744. Unfortunately, this is lower than the national average of $62,880 for all nursing students. 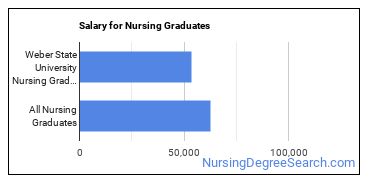 Take a look at the following statistics related to the make-up of the nursing majors at Weber State University.

81% Women
12% Racial-Ethnic Minorities*
For the most recent academic year available, 19% of nursing associate's degrees went to men and 81% went to women. The typical associate's degree program in nursing only graduates about 13% men each year. The program at WSU may seem more male-friendly since it graduates 6% more women than average. 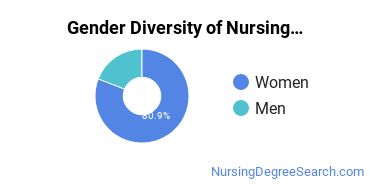 The majority of those who receive an associate's degree in nursing at WSU are white. Around 84% fell into this category, which is below average for this degree.

The following table and chart show the race/ethnicity for students who recently graduated from Weber State University with a associate's in nursing. 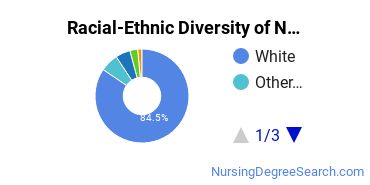 85% Women
13% Racial-Ethnic Minorities*
Of the 399 students who graduated with a bachelor’s in nursing from WSU in 2021, 15% were men and 85% were women. The typical nursing bachelor's degree program is made up of only 13% men. So male students are more repesented at WSU since its program graduates 2% more men than average. 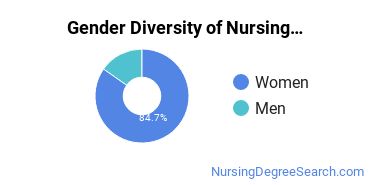 About 81% of those who receive a bachelor's degree in nursing at WSU are white. This is above average for this degree on the nationwide level.

The following table and chart show the race/ethnicity for students who recently graduated from Weber State University with a bachelor's in nursing. 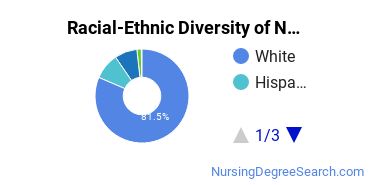 81% Women
8% Racial-Ethnic Minorities*
Of the 26 students who graduated with a master’s in nursing from WSU in 2021, 19% were men and 81% were women. Nationwide, master's degree programs only see 13% men graduate in nursing each year. WSU does a better job at serving the male population as it supports 6% more men than average. 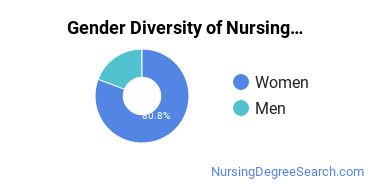 Of the students who received a nursing master's degree from WSU, 73% were white. This is above average for this degree on the natiowide level.

The following table and chart show the race/ethnicity for students who recently graduated from Weber State University with a master's in nursing. 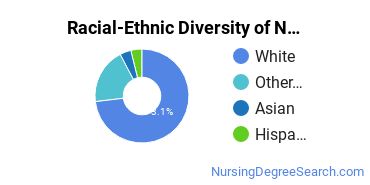 WSU also has a doctoral program available in nursing. In 2021, 12 students graduated with a doctor's degree in this field.

If you plan to be a nursing major, you may want to focus your studies on one of the following concentrations. The completion numbers here include all graduates who receive any type of degree in this field from Weber State University. Some of these focus areas may not be available for your degree level.

A degree in nursing can lead to the following careers. Since job numbers and average salaries can vary by geographic location, we have only included the numbers for UT, the home state for Weber State University.