No student earned an Emergency Room/Trauma Nursing degree in Pennsylvania in 2018-2019.

An ER/Trauma Nursing major is the 25th most popular major in this state.

In this state, there are 159,810 people employed in jobs related to an emergency room/trauma nursing degree, compared to 3,187,320 nationwide. 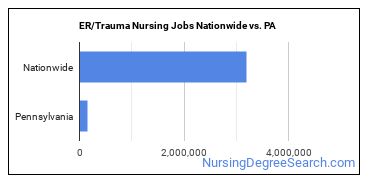 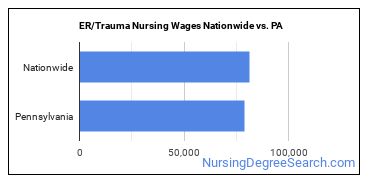 There are 2 colleges in Pennsylvania that offer emergency room/trauma nursing degrees. Learn about the most popular 2 below:

The student loan default rate is 1.10% which is lower than average. 74% of the teachers are full time. The student to faculty ratio is 6 to 1.

Roughly six years after entering college, graduates of this school earn $45,300 a year. It takes the average student 4.31 years to graduate. Seeking financial aid? At this school, 99% of students receive it.

Some of the careers emergency room/trauma nursing majors go into include:

Below are some popular majors in the state that are similar to emergency room/trauma nursing.